What hybridization is involved in the carbon-carbon bonds?

A carbon atom can form a covalent bond with another carbon atom, the most common way this is done being through a single bond (or a sigma bond).

In such a case, the sigma bond is formed between one hybridized orbital from each of the two carbon atoms.

In alkanes like ethane, carbon's orbitals are hybridized - this means that one s orbital and three p orbitals come together to form four hybrid orbitals. Single bonds can form between carbon atoms with other hybridizations as well ( with , for example).

In alkenes, carbon atoms can form double bonds; these bonds, consisting of one sigma and one pi bond, are formed with an hybridized orbital and an unhybridized p orbital.

In alkynes, the carbon atoms can form triple bonds; these bonds, consisting of one sigma and two pi bonds, are formed with an hybridized orbital and two unhybridized p orbitals. 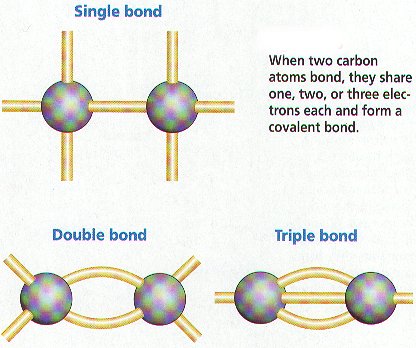