What is the hybridization of #NH_3#?

Ammonia (, or, more accurately, the central atom in ammonia, is hybridized. Here's how you'd go about determining this.

First, start with 's Lewis structure, which must account for 8 valence electrons - 5 from nitrogen and 1 from each hydrogen atom.

As you can see, all the valence electrons are indeed accounted for - 2 for each covalent bond between nitrogen and hydrogen, and 2 from the lone pair present on the nitrogen atom.

Now, here is where it gets interesting. Nitrogen's energy levels look like this 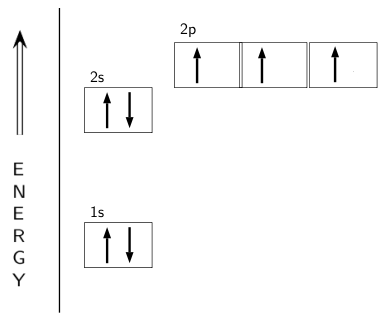 Looking at this energy diagram, one could see that each of the three p-orbitals is available for bonding, so why would the atom need to be hybridized? Here's where stability and geometry come into play.

If the three hydrogen atoms would bond with nitrogen using the available p-orbitals, the bond angles would be . However, this cannot take place since electron-rich regions must be located as far away from each other as possible in space - this is why the bond angle in ammonia is approximately .

Molecule stability also come into play, since the hybrid orbitals will be lower in energy than the three unhybridized p-orbitals.

So, in order to determine hybridization, you must determine the central atom's steric number, which represents the number of electron-rich regions around the atom.

Since it forms 3 covalent bonds and has 1 lone pair, nitrogen's steric number will be equal to 4, which implies that one s and three p-orbitals will combine for a total of 4 hybridized orbitals.

Here's a video on this subject: