What is the relationship between carbon dioxide levels in the atmosphere and global warming?

As carbon dioxide levels in the atmosphere increase global warming increases, assuming no other changes.

Apart from water vapor, carbon dioxide is the most abundant greenhouse gas in the atmosphere. Greenhouse gases allow energy from the sun to pass through and reach the Earth.

This radiation is primarily of wavelengths in the visible light spectrum (about half a micron). When the energy reaches the Earth it heats it up. The heated Earth is actually releasing energy as heat, but it is in a different wavelength (averaged at 11 microns). We refer to energy around that wavelength as infrared. Greenhouse gases block energy at that wavelength. 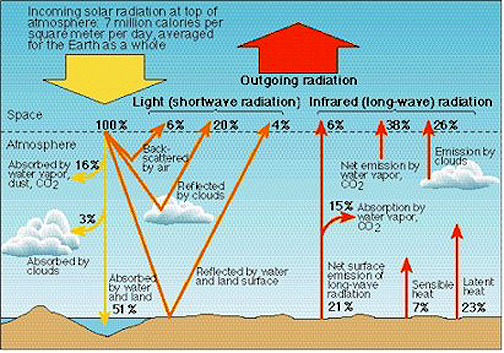 No one disagrees with this at all. The point of debate regarding this is there are a lot of other numbers in that balance and each represents something else that impacts on the budget. Since there are so many other factors some argue that the greenhouse gas factor is somewhat less important.