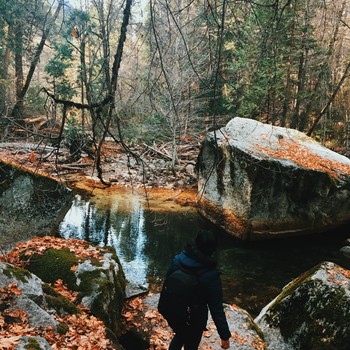 Because of its temperature

The primary greenhouse gases in Earth's atmosphere are water vapor, carbon dioxide, methane, nitrous oxide, and ozone. Without greenhouse gases, the average temperature of Earth's surface would be about 15 °C (27 °F) colder than the present average of 14 °C (57 °F).

The way it reacts to different wavelengths.

Carbon dioxide, like all molecules reacts differently to different wavelengths of energy. Solar Energy is mostly in the visible light spectrum or what is referred to as short wave radiation. The most common wavelength being around 0.5 microns. Radiation at this wavelength pass through carbon dioxide (and other greenhouse gases) very easily, much the same way that xrays can pass through skin without being blocked.

When the solar energy hits the Earth it does not pass through it, instead it heats it. As the ground warms it starts releasing electromagnetic energy as sensible heat (or heat we can feel). Sensible heat is in the infrared spectrum. Infrared (IR) energy is what we refer to as long wave radiation. The IR spectrum covers a somewhat wide spectrum, but the most common wavelength emitted is 11 microns, which is what weather satellites are displaying when you see an IR picture.

Carbon Dioxide is to IR radiation what Lead is to x rays. It does not let it pass through. As such it works very much like a greenhouse would. The glass of a greenhouse allows sunshine in, but does not allow the heat to escape easily.

2346 views around the world