Which President established the custom of not seeking a third term?

Although there was no law that said you can only serve 2 terms until 1947, George Washington wanted to retire to Mount Vernon after his 2nd term. If Washington did run for a third term, historians say that the stress could have killed the already elderly Washington. A president dying in office wouldn't have been so good for a newly formed nation.

It was custom and tradition for the next century and a half that the President only serve 2 terms. Theodore Roosevelt tried to run for a third term under the Bull Moose Party but ended up not winning and split the Republican vote and a Democrat won (Woodrow Wilson) because of it.

The only president to serve more than 2 terms was FDR. First elected in 1932, FDR is considered one of the best presidents in modern American history. He led the country out of the Depression, and led us through WW2 as well. He decided to run for a third term in the 1940 Presidential election. His Republican opponent, Wendell Willkie tried to use him running for a third term against him but it didn't work out so well. Willkie's campaign made these pins. 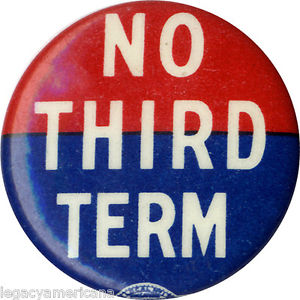 Roosevelt won that election overwhelmingly. He collected 449 electoral votes and 54% of the popular vote compared to Willkie's 44%.

After Roosevelt was again overwhelmingly elected to a 4th term, Roosevelt died less than a year later. VP Harry Truman took office was was elected in his own right in 1948. Shortly after Roosevelt's death, the Republican Congress passed legislation to make running for more than 2 terms illegal. It passed in 1947 and the states adopted it in 1951.

2812 views around the world