Who created the molecular orbital theory?

Robert Mulliken and Friedrich Hund get most of the credit for developing MO theory.

Erwin Schrödinger developed the theory of quantum mechanics in 1926.

Both Mulliken and Friedrich Hund worked together to develop a quantum interpretation of the spectra of diatomic molecules.

In 1927, they published their molecular orbital theory, which involved assigning electrons to states that extended over an entire molecule.

It was Hund who in 1931 first referred to σ and π bonds and Mulliken who introduced the term orbital in 1932.

By 1933, the Hund-Mulliken theory had been accepted as a valid and useful theory.

Here's a photo of Mulliken and Hund, apparently taken at a conference in Chicago in 1929. 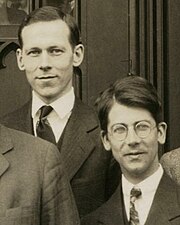 See all questions in Molecular Orbitals and Hybridizations

4235 views around the world