Why is the ozone layer thinning?

Until about a year or two ago, you're right, the ozone layer was thinning. Due to some monumental actions to ban CFC's and other compounds that destroy ozone, it's actually repairing itself. It might take 50-100 years to go back to pre-damaged levels, but it'll get there.

CFC's are the main thing that deplete ozone so I'll focus on them. CFC's are/were released primarily from AC's (CFC's are good coolants), refrigerators (same reason), and computer parts. They rise up into the atmosphere where UV rays strike them, breaking off a chlorine atom. The chlorine breaks Ozone into O and O2, and then binds to the oxygen atom. The cycle will repeatedly let ozone reform and then get broken by chlorine, but there will be perpetually less ozone blocking UV-B rays.

One more thing: in the winter, the temperature drops in the south pole (and sometimes the north) to the point where ice crystals can form in the stratosphere to form polar stratospheric clouds. These trap CFC's and other chemicals, but when the sun emerges in the spring, a motherlode of ozone-destroying chemicals are released, leading to a huge increase in ozone depletion. See the graphic: 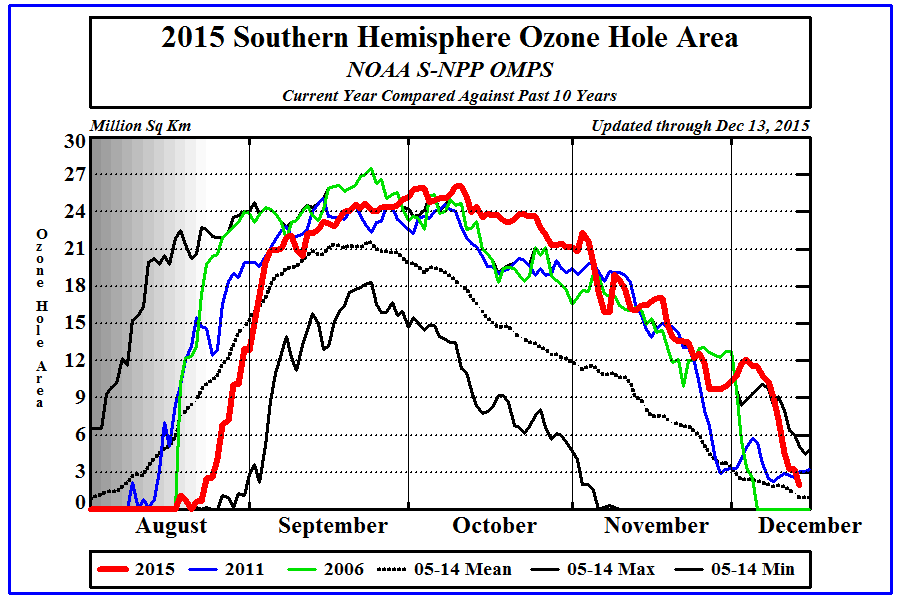 The ozone hole is being measured, and you'll notice (by the way, the seasons are switched so spring is actually in about september), that once spring arrives, the area of the ozone hole goes way up, and then gradually goes down. The stratospheric clouds aren't exactly what you're asking for, but they do have an impact on ozone depletion by CFC's and other compounds.

Bottom line: the ozone layer was thinning because of our releasing of CFC's, and other halogen-containing compounds such as methyl bromide and HNO3.

1943 views around the world