The pressure will decrease.

If temperature and number of moles of gas remain unchanged, then increasing the volume will result in a decrease in pressure - this is known as Boyle's Law.

In other words, when temperature and number of moles of are held constant, pressure and volume have an inverse relationship. If you increase one, the other decreases and vice versa.

Gas pressure is actually caused by the collisions that take place between the gas molecules and the walls of the container.

The force with which the gas molecules hit the wall depends on their average kinetic energy, which is determined by the temperature of the gas.

So, the more energetic and frequent the collisions between the molecules and the walls of the container are, the bigger the pressure.

In your case, you have the same number of molecules and the same temperature, i.e. their average kinetic energy remains constant.

If you increase the volume, you essentially give the molecules more room to move around in, which in turn will cause them to collide with each other and with the container walls less frequently.

So, the molecules hit the walls with the same force, but they don't do so as often as they did when the volume was smaller pressure decreases. 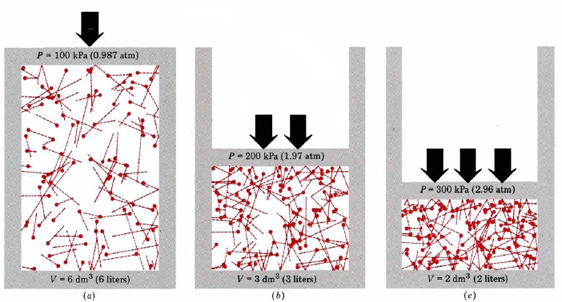 1676 views around the world