A cation's ability to distort the electron cloud of an anion.

The idea behind the polarizing power of a cation on one hand, and the polarizability of an anion on the other, is that the bond formed when two ions are close to each other will depend on

A set of rules called Fajan's rules was put in place to try and predict what the predominant character of a bond will be when the above factors, i.e. ionic size and charge, vary for two ions.

So, depending on thos two factors, you'd get

So, if a cation is small enough and has a relatively high charge, it will attract the electron clound of a large anion, pulling some of the anion's electron density towards itself. 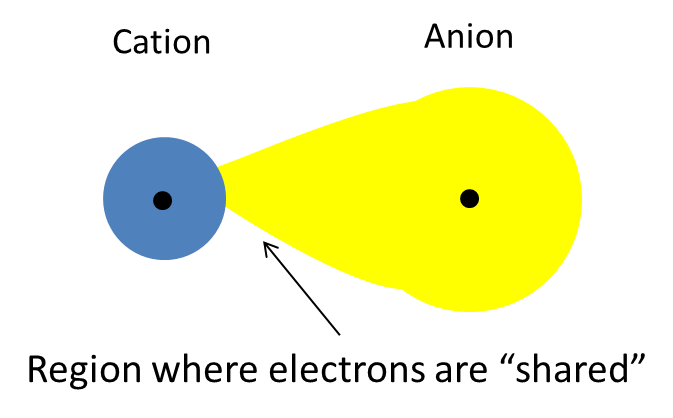 In this case, the larger the anion, the more easily its electrons will be attracted by the cation's positive charge. That happens because larger anions have their outermost electrons located further away from the nucleus.

This, in addition to the fact that these outermost electrons will be pulled less tightly by their own nucleus because of the screening from core electrons, will allow the cation to attract them more easily.

So, a cation's polarizing power refers to its ability to attract the outermost electrons from a nearby anion.

It depends on its size and charge - smaller cations that have higher positive charges will have better polarizing abilities because the positive charge is distributed on a relatively small area.

But remember, the anion counts, too. Even the "best" polarizing cations will have trouble distorting fluorine's electron could, because fluorine is a very, very small anion.