SImply put, because sulfur probably uses its 3p-orbitals to bond with the hydrogen atoms.

I say indirectly because that's the starting point for why the bond angles differ, not the actual explanation.

So, sulfur and oxygen are located in group 16 of the periodic table, but sulfur is one period lower than oxygen; more specifically, oxygen is in period 2 and sulfur is in period 3.

This will affect the way sulfur uses its orbitals to bond with the hydrogen atoms.

This means that hybridization is less likely to occur in hydrogen sulfide simply because it costs more and it pays off less.

It costs more because of the more significant energy gap and it pays off less because hybridizing the 3s and 3p orbitals would not lead to a better overlap, since they differ significantly in size.

So, simply put, it's more likely that sulfur will actually use its unhybridized 3p-orbitals to bond with hydrogen's 1s-orbitals, which would explain the bond anble of approximately - that's the angle between unhybridized p-orbitals. 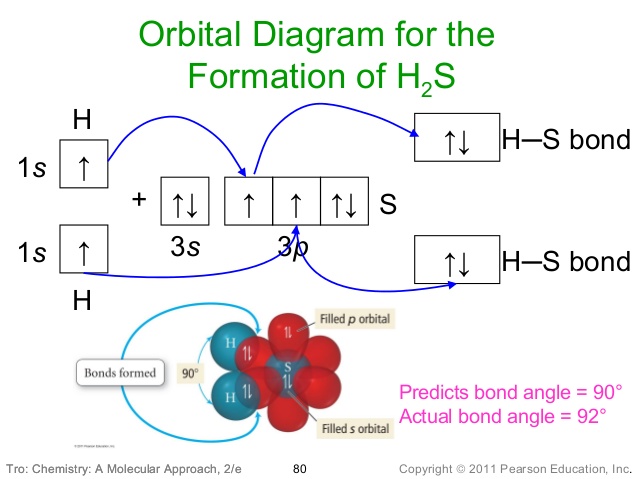 A gradient could also work here, meaning that you would only have slight hybridization.

Bottom line, the difference in atomic size between oxygen and sulfur impacts the sizes and energy levels of the valence shell orbitals, which in turn affects how these orbitals are being used for bonding, i.e. hybridized for oxygen in water, possibly unhybridized for sulfur in hydrogen sulfide.

Hence, hydrogen sulfide has a smaller bond angle than water.