As understood the problem is
A container has X in it. Two electrodes are immersed in X. A DC battery is connected across the electrodes through a switch, bulb and series resistance. Current is passed and glow of bulb noticed in four options. Bulb will be brightest in X which freely available, high mobility ions to carry current in electrolyte.

A. Sugar Solution: Sugar consists of electrically neutral molecules. When sugar is dissolved in water, the solution does not conduct electricity, as there are no ions in the solution. Some electricity may flow due to impurities in the water, solvent.

B. Distilled water: Chemically pure water has a very low electrical conductivity.. This is explained on the basis of ions which are produced by the self-ionization of water. Following reaction in which a water molecule loses the nucleus of one of its hydrogen atoms to become a hydroxide ion. The hydrogen nucleus, immediately attaches to another water molecule to form hydronium ion, represents the reaction.

As such a very small current will flow through the bulb. 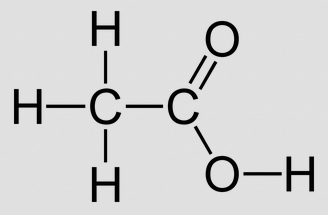 The hydrogen separates from the molecule through ionization

This gives Acetic acid its acidic character. However it is a weak monoprotic acid. It is seen that in 1.0 M solution merely 0.4% of the acetic acid molecules are dissociated. As in the problem we are using concentrated acid, the dissociation will be much smaller. As such some current will flow.
D. Dilute sulfuric acid: It is an inorganic diprotic acid and in dilute form readily dissociates to form following ions

It is a strong acid. As such there is no un-dissociated acid molecules in the solution. Not only the hydronium ions, formed by dissociated hydrogen atoms, conduct electricity but sulfate ions also help in conduction of electricity.

Keeping above discussion in view option D is the correct option in which bulb will light the brightest.

909 views around the world