How do you determine alpha decay?

First know what is an alpha particle

Charge of an particle can be calculated

Therefore an alpha particle has a charge of 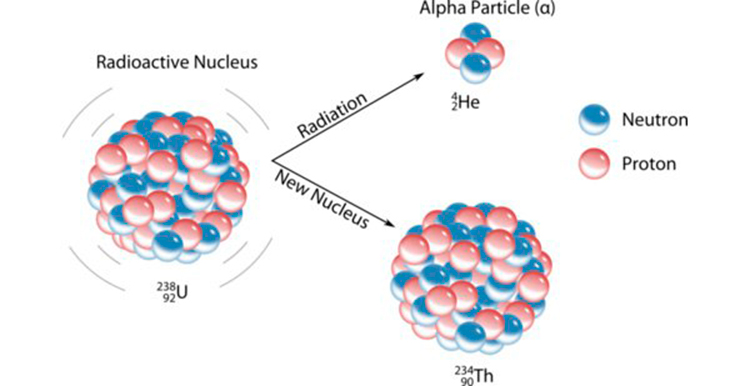 How to calculate the products of an alpha decay

First step In every alpha decay an alpha particle is formed though all alpha decay have different daughter nucleus . So first look at the father nucleus and list its number of protons and its atomic weight.

Its easy to understand when we solve an example . So lets take metal as the metal and its atomic weight as 14 and number of protons is 6
Step 2) Calculate the number of neutrons from the following equation

For example (Please note that this is only an example)

Step 3) After subtracting add the remaining protons and neutrons (4+6 = 10) 10 is the atomic weight of the new element nucleus.

So now this alpha decay can be represented as

(You can also solve the equation by directly subtracting 4 from the atomic weight and 2 from number of protons but in chemistry we cannot give brief answers !!! )

If it were a real example you can check the element which has an atomic mass of 10. But as this is an example there is no element with 10 as the atomic weight

Represent the alpha decay of Uranium

The element which has 259 as the atomic weight is rutherfordium.

can be also represented as as this is the sign for alpha.