How does temperature affect SN1 and SN2 reactions? 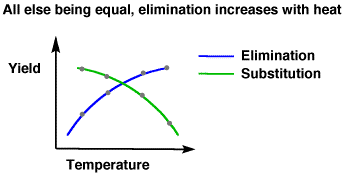 Why is that? Consider molecules being "lazy", for example.

With reactions, a replacement occurs via backside attack, a spatial pathway that is fairly simple to figure out if the nucleophile is fairly strong (i.e. it has a strong desire to forgo its "laziness" and try harder) and has low steric hindrance (is not bulky).

With reactions, the nucleophile has to be aligned antiperiplanar to the electrophilic center for the elimination to occur. That means the nucleophile has to move around until it finds the optimal position in space to do the elimination, which means it needs to use extra energy until it finds that perfect spot. If the nucleophile is fairly weak and is rather bulky, it convinces itself that it would rather not move around as much, and prefers to be "lazy". (Let's face it, who wants to spend more energy than they need to?)

If you raise the temperature, the nucleophile has more energy on average, and is much more OK with moving around until it finds the best spot for elimination because it's able to move much more quickly.

Now, let's look at a reaction coordinate diagram to see why an increase in temperature causes this, mathematically: 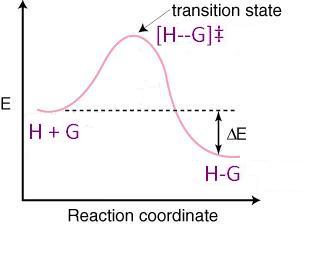 Recall the popular thermodynamics equation, modified for the transition state: