What are common mistakes students make with nucleophilic substitutions?

1) This is more of a pre-emptive concern, but drawing mechanism arrows has a certain flow to it.

It doesn't start at the end, jump to the beginning, then the middle, and back towards the end again. It starts from the beginning and goes all the way to the end.

If you drew the upper arrow first, you would be saying that the leaves first, and then the attacks second, rather than the other way around, but that's not what kinetics and thermodynamics studies show. It is BECAUSE the attacks that the has to leave.

2) Many students don't realize that many reactions give a mixture of products. It's not always , or , or what have you. If you are aware of that, you may be able to work under specific conditions such that that actually is likely to be the case. For example: 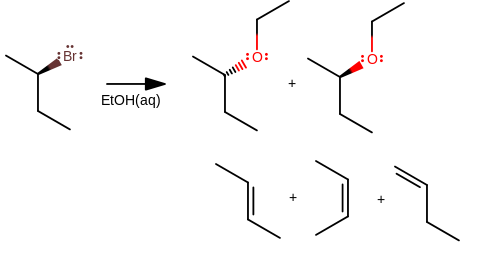 Depending on the conditions, due to the bulkiness of the secondary alkyl halide, you can get any of those products.

As a result, we should realize that picking a secondary alkyl halide for is not a very good choice.

3) Solvents are also quite important. If you want to do an reaction, for example, don't pick a protic solvent. The nucleophile will steal a proton from the solvent, thus deactivating itself. 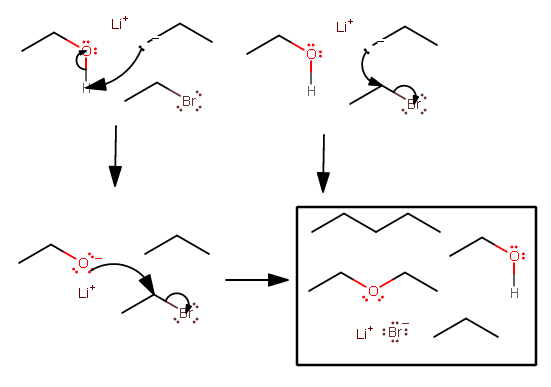 You should notice that the right mechanism is what you expect to see, generating your product, pentane, and retaining your solvent, ethanol.

The left mechanism, however, is what you don't want to see: the deactivation of your expensive propyllithium nucleophile. Actually, the deprotonated solvent (ethanolate) then acts as the nucleophile, and you don't get your pentane product; instead, you get diethyl ether and a propane side product. Ugh.

In the end, both mechanisms can occur at the same time, giving you that ugly mixture of products, when really, the goal was to make pentane...

4) reactions are actually supposed to give you a stereochemical mixture of products. Why? Because the carbocation intermediate is planar.

4953 views around the world