How does the formation of covalent bonds relate to the octet rule? 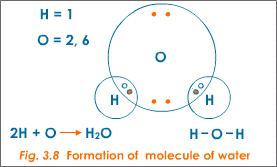