How would higher temperatures affect the arctic?

Average annual temperature in the arctic has warmed 2.9°C since the start of the 20th century. Given that the arctic is characterized by sea ice, snow, and frozen soil, and temperatures below freezing, increase in temperatures will have profound and wide-reaching effects.

A shortage of sea ice has already spelled trouble for polar bears, that now have to swim longer distances between the ice. Loss of sea ice is a serious concern for polar bears. Read more about polar bears and climate change here. Seals, walruses, and some species of fish are also adapted to sea ice cover. 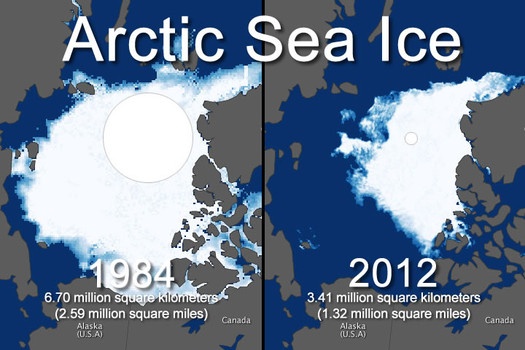 Warmer waters in the arctic have also brought in species that previously were not adapted to these cold climates. For example humpback and fin whales have been found in this region during times when they previously stuck to warmer waters. While this may seem like a good thing, humpback and fin whales are now competing with bowhead whales. Read about this recent study here.

Many people also live in the arctic and their lives will be affected. Land rights will change as the land and ice literally changes and disappears, hunting will be negatively impacted as species become more rare or change their migration patterns and/or shift to suitable habitat, transportation routes will change as ice melts, weakening permafrost is causing shifts in roads and buildings, and so forth.

To learn more about how the arctic is fairing in 2015, see this link or this article.

1394 views around the world