In Boyle's Law, when we plotted the graph between volume and pressure, why we put the volume in the x -axis and pressure on Y-axis? Thank you.

Technically, it can be either way...

If the volume is labeled for the -axis, then that makes it the independent variable here; that is to say, we're changing the volume to measure the pressure: 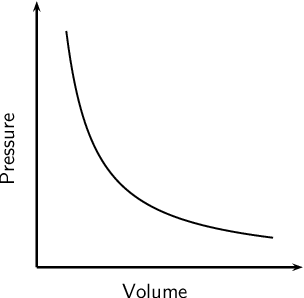 However, this graph would look exactly the same if pressure were the independent variable; i.e. we're changing the pressure to measure the volume:

It really all comes down to which variable you're changing and which one you're measuring. I think more often, pressure will be measured against volume, so volume would then be in the -axis. (That doesn't mean pressure couldn't be; it may or may not be easier, though, to change the volume than to change the pressure (without changing temperature.)

9434 views around the world