Is torque measured in foot pounds?

Torque is usually measured in newton meters or joules. However, scientists usually use newton meters instead of joules in order to separate them from work and energy.

Torque is the moment of force, and can be thought of as a rotational force.

The pound-force (symbol: lbf[1], sometimes lbf,[2]) is a unit of force used in some systems of measurement including English Engineering units and the British Gravitational System.[3] Pound force should not be confused with foot-pounds or pound-feet, which are units of torque, and may be written as "lbf⋅ft".

They should not be confused with pound-mass (symbol: lb), often simply called pounds, which is a unit of mass. 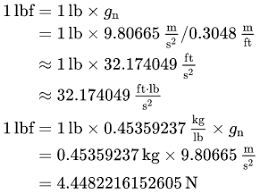 Yes. Torque is measured in

Relation between lb force and Newton is given in the above table.

4727 views around the world