To which part of a water molecule would #Li^+# be attracted?

A simple way to explain this concept is with something called electronegativity. 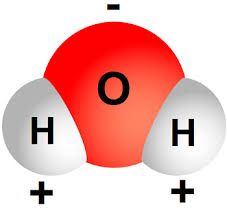 If you were to take a look at the Oxygen atom's electronegativity value, you would be able to tell that it is a very electronegative element. Therefore, it will draw the electrons away from the Hydrogen atoms.

The result will be that the Oxygen will acquire a partial negative charge, and the two Hydrogens will receive a partial positive charge (the sum of the charges would be ).

Now, lets think about . We know from common knowledge that "opposites attract." After taking a look at the water molecule above, we can tell that the positive Li would be attracted to the negative O atom. This is because the oxygen has a minus sign (as explained) and the Hydrogens have a plus sign.

Therefore, we can say that the atom would be attracted to the Oxygen atom of the water molecule.

I hope that helps!

Well, which part of the water molecule is most electron-rich?

Clearly we speak of the oxygen centre. When we represent the dissolution of a lithium salt in water, we often write.......

Where specifies the aquated ions, i.e. and . And thus in aqueous solution each lithium ion is associated with, i.e. solvated by, several water molecules, and likewise for the chloride ion.