What are the optical isomers of amino acids?

They are the two non-superimposable mirror image isomers that all alpha-amino acids except glycine have.

Alpha- amino acids have a central carbon atom with a tetrahedral arrangements of bonds around it, to which , , and an group are bonded. So long as the group is different to the other three then there are two distinctly different stereoisomers that can be formed. These are best represented by their mirror images, drawing the 3D structures as shown here for alanine: 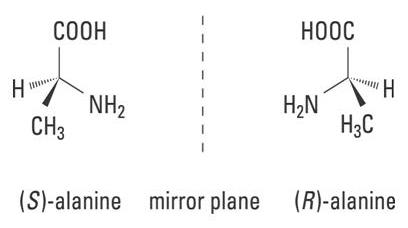 A carbon such as this central one is referred to as chiral. A more complex molecule may have more than one chiral centre, and therefore more than two optical isomers.