What is the largest organic molecule?

DNA is typically measured in the number of base pairs it contains.

For example the human nuclear genome consists of about base pairs (bp) spread over 24 chromosomes.

The length of the chromosomes ranges from to bp, with an average of about bp.

So, for the longest human chromosome, the length of the DNA molecule is

The genome of Paris japonica has more than 150 billion base pairs contained in 40 chromosomes. 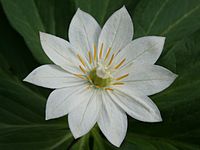 That makes it 50 times longer than the human genome!.

That's about one-fourth the mass of all humans alive!

4779 views around the world