What would happen if the following aromatic molecule with an alkenyl sidechain reacts with sulfuric acid?

Well, we can't assume that there is no water; the sulfuric acid is just concentrated, implicitly.

As-written, the sulfuric acid would protonate the most acidic part of the molecule, namely the double bond on the sidechain. Now, if you recall, benzene can act as a nucleophile in this situation, because it is favorable to form a ring with 5 or 6 members.

This is a special situation, and it is easy to miss that benzene can temporarily give up its aromaticity to make a 6-membered ring and regain its aromaticity soon afterwards. 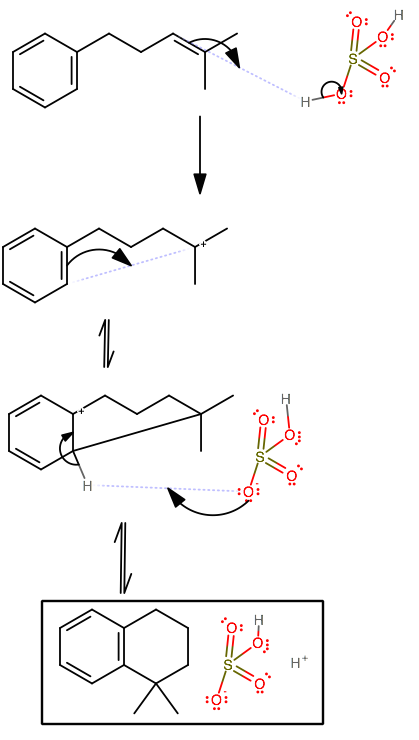 The sulfuric acid at the end then exists as bisulfate and a proton since the of sulfuric acid is about 1000, and so it dissociates easily in solution.

It's also acceptable to write hydronium instead of sulfuric acid because it is implied that the sulfuric acid is concentrated, and thus it must be in solution with something else, namely water.

531 views around the world