As the size of the element increases it does not want an electron and it behaves more like a Lewis Base.

In chemistry, a lone pair refers to a pair of valence electrons that are not shared with another atom and is sometimes called a non-bonding pair. Lone pairs are found in the outermost electron shell of atoms(valence shell). They can be identified by using a Lewis structure.

As a result the reaction is a endothermic as more bonds are added to the product.

When a base donates a lone pair to a Lewis acid the Lewis acid actually accepts it.Therefore Lewis acid is an ion or a compound that can accept an electron pair from an ion or base.

In water Lewis acid form complexes(not to be confused with ions) which is a Bronsted Lowry Acid.

Due to small size of boron, the sum of its first three ionization enthalpies is very high. This prevents it from +3 ions and forces it to form only covalent compounds.

But as we move from B to Al , the sum of the first three ionization enthalpies of Al considerably decreases and is therefore able to form ions. In fact Al is highly electropositive metal.

However, down the group , due to poor shielding effect of intervening d and f orbitals(because of their structure), the increased effective nuclear charge holds electrons tightly (responsible for inert pair effect ) and thereby , restricting their participation in bonding.

As a result of this only p-orbital electron may be involved in bonding. In fact in Ga , In and Tℓ, both +1 and +3 oxidation states are observed. The relative stability of +1 oxidation state progressively increases for heavier elements : .

As the size of the element increases it does not want an electron and it behaves more like a Lewis Base.

Because that the electron affinity of boron is the smallest boron will easily accept an electron. According to your question the tendency of a group 13 element to behave as a lewis acid decrease with increase in size. And that is why the aluminium has a lower electron affinity. A increase in electron affinity is seen in gallium and indium which does not apply to the trend. This is because of d orbitals which have very poor screening effect and therefore the atomic radius of gallium is less than that of aluminium. But in indium the 4d sub shell is not fully occupied which causes the atomic radius to increase .

The tendency of a group 13 element to behave as a lewis acid in decreasing order.

And this is also the order of increasing atomic radii

That is, the better the LUMO can accept electron density, the stronger the Lewis acid.

If we take to be the surrounding atom in some molecule, and then we vary the central atom from to , the size of the valence and orbitals on the central atom increases going from to (and their energies also increase a bit [by about ]).

Here are examples from the hydrogen atomic wave functions (relative comparison only): 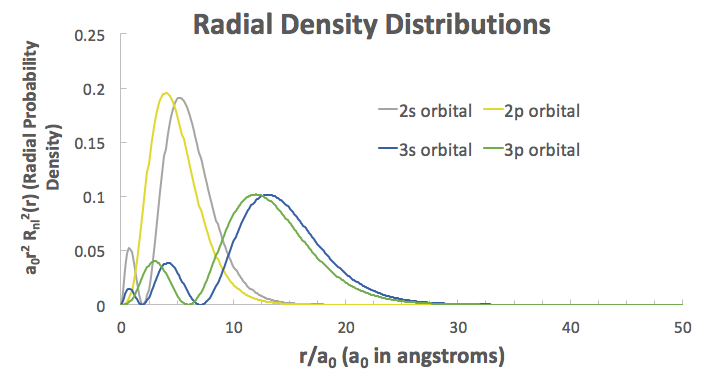 Among these antibonding MOs is the LUMO (which primarily belongs to the central atom), labeled the in the following MO diagram comparison:

(You can click on the image to zoom in. Energy data was from Appendix B.9. A reference MO diagram [Miessler et al.] for relative energy comparisons can be found for here.)

The LUMO is what accepts electrons when or act as a Lewis acid. When the LUMO is higher in energy, it is more difficult to accept electrons from Lewis bases (except from those with HOMOs of particularly high energies).

Assuming the same interacting Lewis base (such as ) is used as a basis of comparison, that makes a worse Lewis acid than .

(I'm not going to say it's a general trend, but it proves true for these two central atoms.)

See all questions in Lewis Acids and Bases

7562 views around the world