As atomic orbitals form they require how many electrons to fill the orbital?

I think you're confusing atomic orbitals with molecular orbitals.

So for this hypothetical molecule, the molecular orbital that forms between them has two valence electrons.

Here's the thing - atomic orbitals don't actually require any electrons in them.

Case in point: doesn't have any electrons in its orbitals, and that's totally normal. A simple way of talking about this is that there can be , , or electrons in a single atomic orbital, but there is no requirement for a specific number.

The electron population within molecular orbitals constitute the chemical bonds made between atoms! 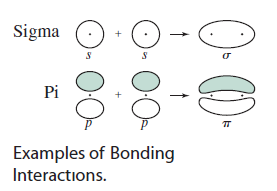 (The dots in the diagram represent atoms, so those are not electrons.)

Actually, each and overlap (and , which is more complicated) requires two valence electrons to be in between the two atoms when the chemical bond forms.

(How the electrons are shared or transferred is another story, but what matters is that there are two.)

456 views around the world