How can I convert 2-methylhexane #C2-C3# bond from Newman projection to bond line notation?

Start with the two most stable staggered Newman projection conformers for 2-methylhexane viewed along the bond. 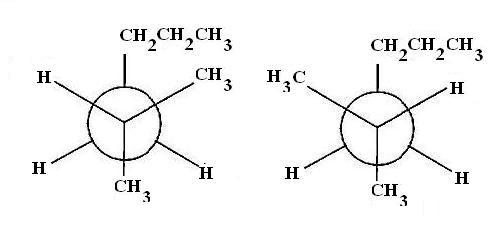 In order to determine the bond line notation for 2-methylhexane you can pick either of the two projections shown above. I'll show you the one on the left.

The first thing to do is determine the groups attached to the two carbonds that form the bond. Let be the front carbon, represented in the diagram by the intersection of the three in the center of the circle.

Now that you've determined what groups are present, you must draw the hexane parent chain. I've labeled the and carbons to make the conversion easier

Notice that the two groups that are drawn in the plane of the page are already there - the methyl group attached to and the propyl group - - attached to .

Now it's time to place the groups that were not in the plane of the page. The trick here is to know that hydrogen atoms attached to carbon atoms are not shown in bond line notation.

See all questions in Newman Projection to Bond line Notation

9636 views around the world