How can I convert 3-methylhexane #C_3−C_4# bond from Newman projection to bond line notation? 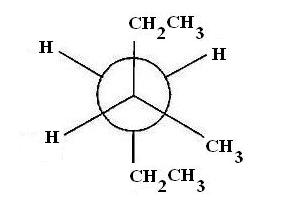 The most stable conformer for 3-methylhexane viewed along the bond has two ethyl groups in anti position and gauche interaction between an ethyl group and a methyl group.

Before attaching the groups to each carbon, you must firts draw the parent chain, hexane

The two ethyl groups are already attached to the and carbons because thy're part of the parent chain. Since hydrogen atoms are not drawn in bond line notation, the carbon will not have anything visible attached to it.

However, the carbon will have the methyl group - - attached and visible in the notation.

That is the bond line notation for 3-methylhexane.

See all questions in Newman Projection to Bond line Notation

9544 views around the world