Why do Van der Waals forces hold molecules together?

Because they occur in such large numbers, albeit for only very short amounts of time, their effect is great.

Van der Waals forces are very weak intermolecular bonds that occur as a result of rapid changes in electron density within a molecule.

Within a molecule, even if there is no overall charge or 'dipole' associated with it, the exact electron distribution will not be perfectly symmetrical and equal across the whole molecule continually. When, for example, electron density shifts from one area of a molecule to another, the original area will end up exhibiting a VERY slight positive charge effect (this is due to to the electron (negative) density moving away from it). 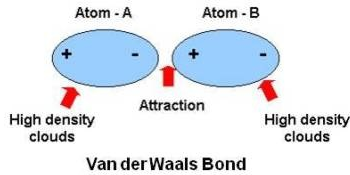 The actual interaction is momentary - it does not last very long AT ALL. However, as interactions are occurring and vanishing all the time across millions of molecules in a substance, the effect is that of constant bonding between molecules.

2950 views around the world