Help with these reaction questions???

That's 10 problems but alright. Normally you shouldn't ask 10 questions in one. Next time try asking these separately.

I see you have aromatic reactions, so you can probably do second-semester synthesis.

a) You actually can't just use solid here; good attempt, but it would need to donate two electrons to deprotonate acetylene, and it only has one 3s valence electron as . You probably meant or . 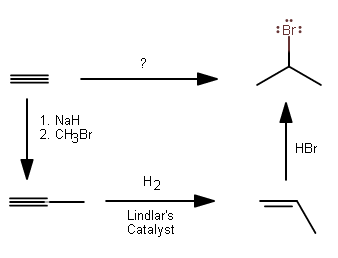 deprotonates acetylene (pKa of is ), then acetylene acts as a nucleophile to backside-attack and make a bond.

Then Lindlar's catalyst catalyzes the partial hydrogenation of the alkyne, but doesn't go all the way (unlike using as the catalyst). Finally, adds Markovnikov to the alkene and puts the on the more substituted carbon.

b) This one has some complications due to Zaitsev's Rule claiming that the more substituted alkene or alkyne gets generated. It would be great to move the double bond, but there's a better way to do it. 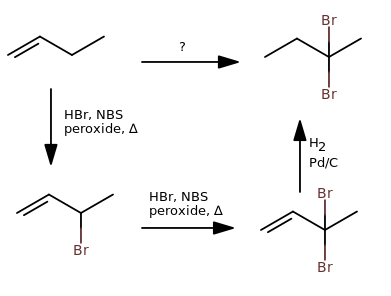 Instead of going through the trouble of brominating, and then eliminating, and then isolating the major product... just use the radical hydrobromination reaction of NBS in the presence of a peroxide and heat, and that gives you a bromine on the allylic carbon.

Do that twice, and you can reduce the double bond last. I found it to save one or two steps.

c) We can get creative with this one. You want a secondary amine, so let's not work with much ... 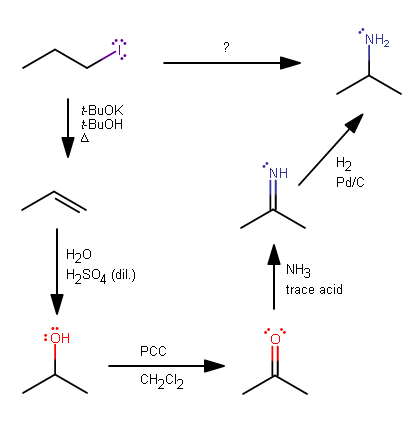 This kind of spans both semesters, so it's good review.

Elimination via tert-butoxide to generate a bond. Then, water in dilute sulfuric acid is the acid-catalyzed hydration reaction from first semester. PCC in dichloromethane is an oxidation of alcohols by one step, from late second semester. You could alternatively accomplish the same oxidation result using .

This can be followed by reacting with ammonia at about ("trace acid") for optimal generation of an imine, which can be reduced via catalyzed by !

It's probably better than trying to perform with ammonia on a secondary alkyl halide. Too much and that might happen there.

d) You gained one and lost one bond, which is a sign that this one is just a one step Grignard plus a workup. 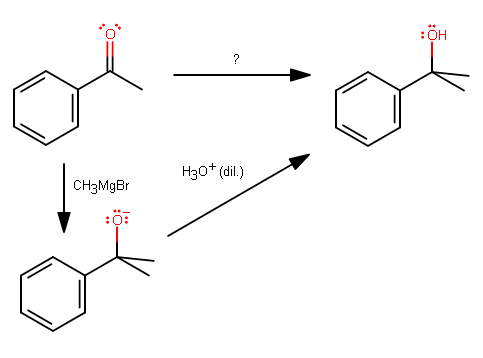 e) For this one we can get creative and utilize a fun reaction. 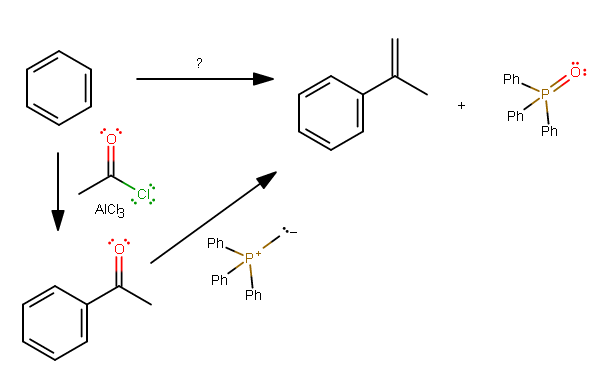 The Friedel-Crafts acylation reaction, catalyzed by aluminum chloride, goes through an acylium intermediate before adding on the acyl group. Then the Wittig reaction, which uses a triphenylphosphine compound, basically gives a bond in place of a bond!

f) This one could be done in multiple ways, but here's one that uses some fairly recent reactions for you, some maybe even new. 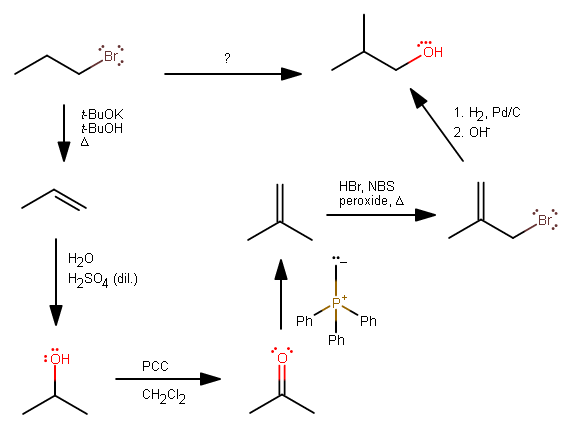 You've seen the first few steps in part (c). After the Wittig reaction, we can use N-bromosuccinimide, which overall gives bromine at the allylic carbon. Since the alkene was symmetric, it gives good yield.

Then this last bit reduces the double bond, and then replaces the with an in an .

g) This one was very tricky. 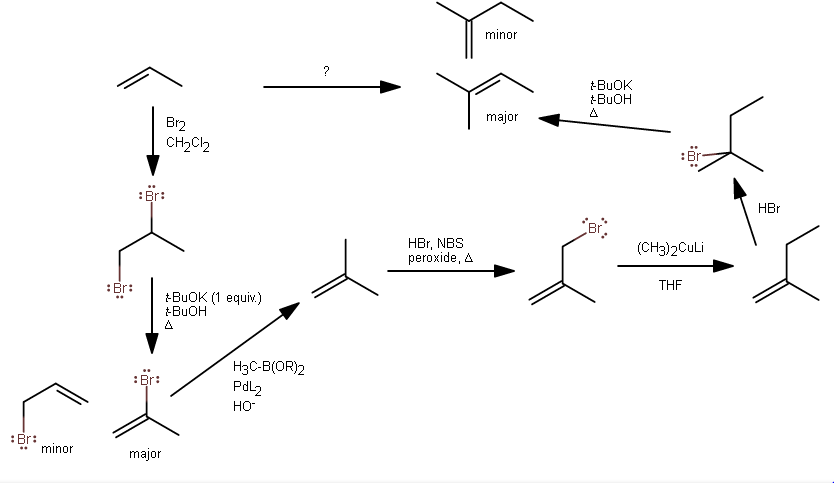 Not a great synthesis, but it works. It aims for a vinylic halide, which can then be used in the Suzuki reaction with an (organoboron) compound.

The NBS reaction adds bromine onto the allylic carbon, which allows for a Gilman reaction in which the alkyl halide is not vinylic or aryl as it would have to be for a Heck or Suzuki reaction.

Gilman works with many types of alkyl halides, and this one qualifies. For it we use a dialkyl lithium cuprate () reagent.

The rest you've seen before.

h) This one seems easy, but you cannot just use an acetylide. It makes too many carbons in the end. Gonna see more Wittig action! 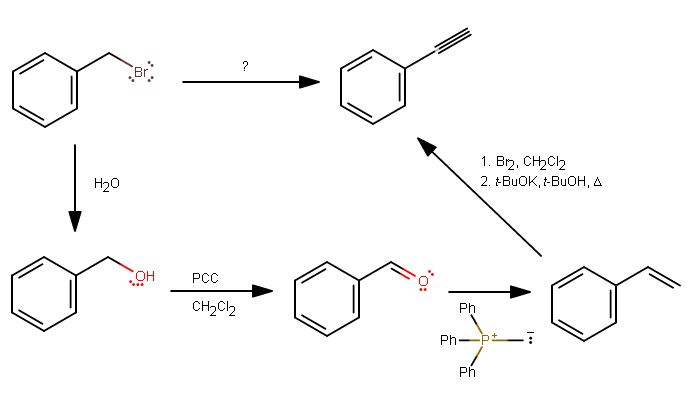 i) This one took a lot of thinking... I ended up resorting to alkynes to extend the number of bonds. Then I used HBr with the Suzuki reaction to add in a methyl and the last bromine. Note that using on the alkyne requires using the right ratio so that you don't get the geminal dihalide, but just the vinylic halide. 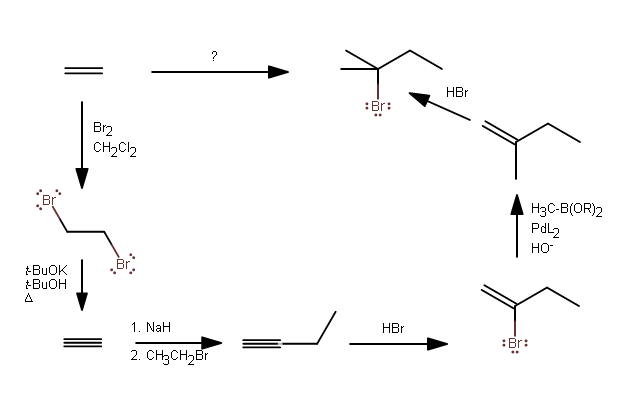 j) This one might be simple, but I apparently found a pathway using a lot of extensive, sometimes obscure aromatic reactions. Still helps review the reactions in my opinion. 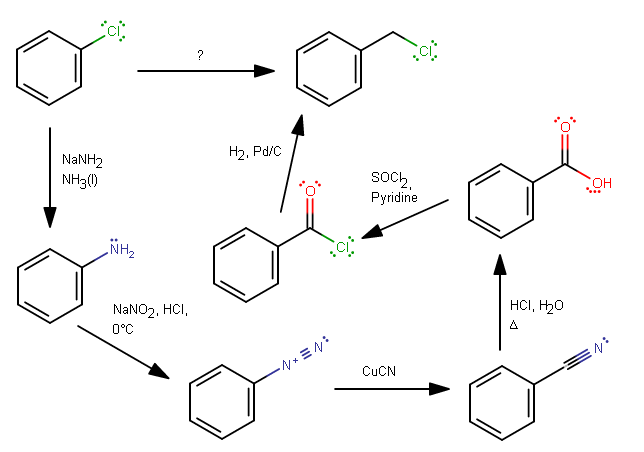 The first step goes through a benzyne intermediate due to the very strong lewis base. Then we move to create an arenediazonium salt, which reacts in a nitrile Sandmeyer reaction to generate phenyl nitrile.

The nitrile can be turned into a carboxylic acid via heated acid-catalyzed hydrolysis, and the can be converted to a using thionyl chloride in pyridine.

Finally, the carbonyl can be reduced using catalyzed by since it is adjacent to the benzene ring.

3263 views around the world