Starting from oxo compounds, #("I")# how do you draw the mechanism for production of 9-iminofluorene? #("II")# What is the mechanism of reacting acetone with p-methylaniline in trace acid?

The trick to doing this is to replace the nitrogen and its hydrogen(s) with , and figure out what amine gives the result.

(I) Since the imine group has no non-hydrogen groups, the amine used is .

(II) Since the imine group's double bond is connected to the propyl group on the position, the ketone is acetone, while the amine contains the group, p-(4-methylphenyl).

So, your amine here is p-methylaniline (or you can call it p-anilinotoluene).

In this case, the amine couldn't have been N,N-dimethylamine, because you can't have a double bond directly connected to benzene in this neutral aromatic compound. So, the oxygen had to have belonged to the propyl group at the position above.

An oxo compound contains an bond, where is some atom. Could be carbon. Given those imines, we are looking at carbonyl compounds.

I don't think you have to start from benzene. That would be a bit too over-the-top. Since the question only asks to start from "oxo compounds", here's one way to do it.

To do this, we are looking at reacting with an amine in trace acid.

Adding trace acid, specifically , gives optimal activity for the amine to act on the carbonyl group, allowing the mechanism to complete without deactivating the amine significantly.

The general mechanism here is: 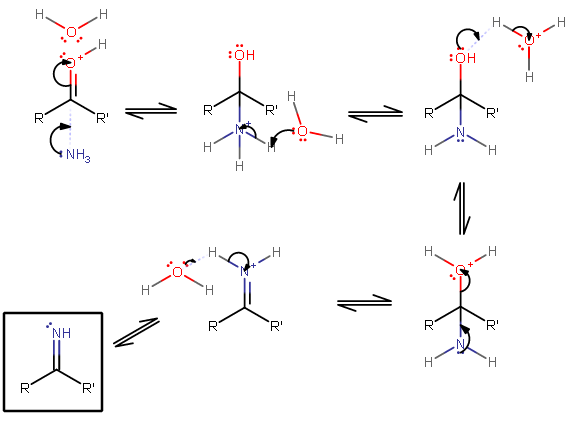 So replace and on the ketone with the rest of your compound, and work out the mechanism on your own from here.

The best way to learn on a tough mechanism like this is to do it yourself, especially since it's a useful synthesis to know.

(Note: This resembles Wolff-Kischner reduction, except Wolff-Kischer is done in base, rather than acid. It's also quite a bit shorter.)

This is similar to (I). As an exercise, I'll tell you your starting reagents, but I'll ask you to do the mechanism.

In this case, the amine is more complicated, but the mechanism is pretty much exactly the same.

Remember to protonate your ketone first, using an aqueous !

828 views around the world