Help me explain #"S"_N1# reactions? I was trying to explain it to my daughter.

reactions are first-order nucleophilic substitution reactions, which means that their first step is the slow step in which the bond with the leaving group is strong and the nucleophile is slow.

That means in general, the leaving group leaves before the nucleophile attacks, and a detectable carbocation intermediate forms.

This is in line with the definition of a first-order reaction since the slow (rate-determining) step is significantly unimolecular (i.e. the nucleophile is too slow to assist the leaving group and be a second participant in the rate-determining step).

The thermodynamic side of things is that a carbocation is in general less stable than the starting compound, for the predictable reason that the central carbon is electropositive due to missing two electrons.

A carbocation increases in stability with an increasing number of alkyl groups (which are electron-donating/releasing) surrounding it.

That is because the donated (negative) electron density stabilizes the electropositive central carbon (an effect called hyperconjugation).

A carbocation is planar (its central carbon's orbital is empty).

i.e. If you are to form a chiral product (for carbon compounds, four different functional groups - even if one of them is )...

...You form both enantiomers in equal quantities because either face is as likely to be attacked. 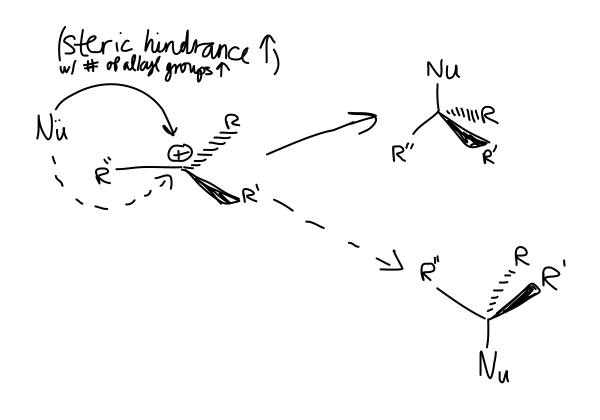 So if you have one enantiomer, you also have the enantiomer (non-superimposable mirror images).

In addition, the kinetic side of things is that the greater the number of alkyl groups around the central carbon, the bulkier and more sterically-hindered the carbocation is.

That means the more alkyl groups there are surrounding the central carbon, the more crowded the leaving group is and the more quickly it wants to leave to form the carbocation.

CONCLUSION ABOUT PREDICTING SN1 VS SN2

Hence, reactions occur more slowly and least easily for methyl carbocations, and more quickly and most easily with tertiary carbocations.

Similarly, occurs when does not, if both reactions are under the same conditions otherwise (temperature, solvent, etc) - though technically, both can occur to the same substrate.

1798 views around the world