The mechanism shown above is not entirely accurate. It is missing the donation of one of the electrons into the antibonding orbital of an ethene carbon in the first step.

Here is the accepted mechanism: 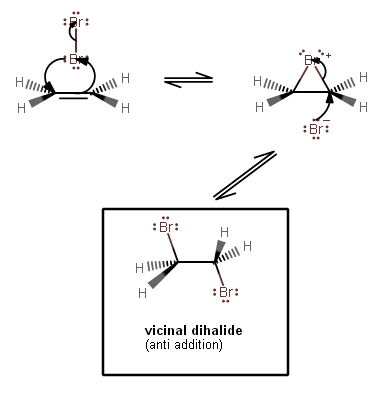 1. The first step should actually have three arrows, which forms a reactive bromonium intermediate, not simply a carbocation intermediate like shown above.

The way the mechanism is written in the question depicts ethene as a nucleophile, when it is supposed to behave as an electrophile (hence, electrophilic addition).

So, the acceptance of electron density into the carbon antibonding orbital is indeed a logical feature that was missing in the mechanism.

2. The second step then involves attacking at the more-substituted carbon to yield the anti-addition vicinal dihalide.

The bromonium bridging bonds are easily broken; you can probably imagine the strain it puts onto the molecule itself. So, the becomes a sufficient nucleophile in this step.

This doesn't make sense, because a positive dipole doesn't attack anything or donate electron density to anything. It attracts the donation of electrons, or is generated/induced as a result of electron donation.

Bromine is not a nucleophile in this mechanism, though can be once the bromonium intermediate forms, because its electron density is "loose" and capably donated.

Ethene is the electrophile and nucleophile at the same time, in some sense.

"what i would like to know is why and how this happens in detail."

The bromine is polarized because it is a large and polarizable molecule. Basically, its electron density is "loose" and easily distorted by incoming electron density, such as from ethene.

The placement of each dipole reflects the final charge acquired by each bromine atom; the negative dipole becomes the full charge on the free ion, for instance.

757 views around the world