How will you convert methane to the following: ?

Methane being as unreactive as any alkane to most reactions (having a pKa of about ), we pretty much have to begin with a radical halogenation to turn it into a reactive species. Specifically we can go with radical bromination because for experimental reasons it gives a better yield than radical chlorination.

From that point, we can get a bit more... original/creative. 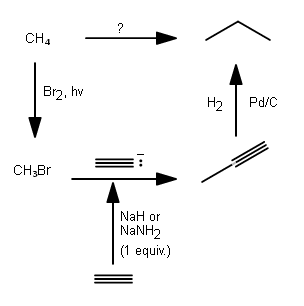 Making propane is not extremely difficult from here; simply use a very strong lewis base like sodium hydride or sodium amide to deprotonate acetylene.

Then you can react that as a nucleophile with the alkyl halide (as an electrophile) you just made to generate methylacetylene, which reduces down to the alkane via catalyzed by over .

Simple modification of the above pathway: just replace the acetylene that you bring in from a separate source with methylacetylene, and you have introduced an extra carbon into the semi-final product.

In that case the triple bond is not on the terminal carbon but on carbon-2. Then the reduction to the alkane generates butane.

This one is quite a bit trickier. I ended up simply making methanol from methane, and making a carboxylic acid from a separate acetylene source. 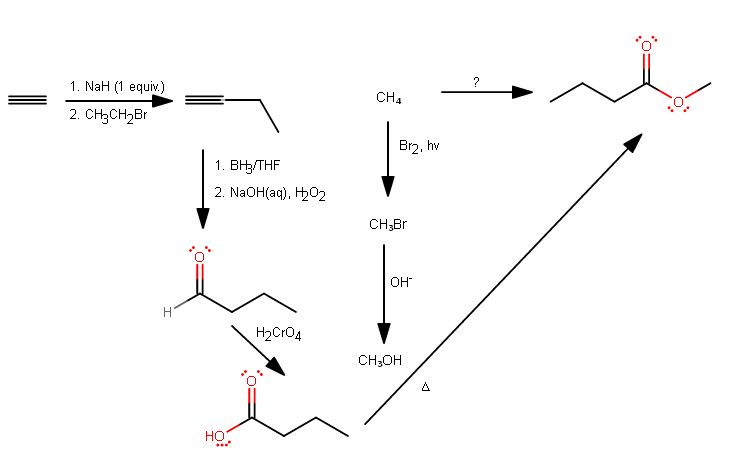 From acetylene, we used the and idea from before. The hydroboration adds anti-Markovnikov onto the alkyne, giving a terminal enol, which tautomerizes to the aldehyde (in this case, in base).

Heating with the alcohol dehydrates the carboxylic acid and alcohol to combine them into the ester in a Fischer esterification.

To be honest, it's much easier to start from acetylene...

With this I invoke the Grignard reaction, which I hope you've learned at this point; it's one of the first labs you do in organic chemistry 2. You wouldn't have prepared the Grignard reagent itself, but you would have used it on an alkyne. 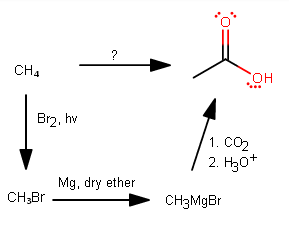 Weak acid finishes off the reaction by easily donating a proton to the methyl anion and turning eventually into , , and .

Take the ethanoic acid you made, and simply reduce it using . It's a dangerous substance, but it is necessary to use it when reducing a carboxylic acid; wouldn't be reactive enough, though it can reduce ketones, aldehydes, and the other more reactive carbonyl compounds.

essentially acts as a hydride () donor, giving you ethanal, followed by ethanol. It does not stop at the aldehyde.

(A nice alternative that does stop at the aldehyde is lithium tri-tert-butoxyaluminum hydride.)

How about the following…

9653 views around the world