In a diels-Alder reaction with cyclopentadiene and maleic anhydride, what side reactions can occur?

You should notice that both of them have three double bonds. It is very possible that cyclopentadiene can dimerize.

And although it may seem tempting to believe that maleic anhydride can do that too, it is in an s-trans conformation, which isn't favorable in the Diels-Alder reaction, so I would only choose the cyclopentadiene dimerization as a plausible side product.

Here are the products that I think would be most possible: 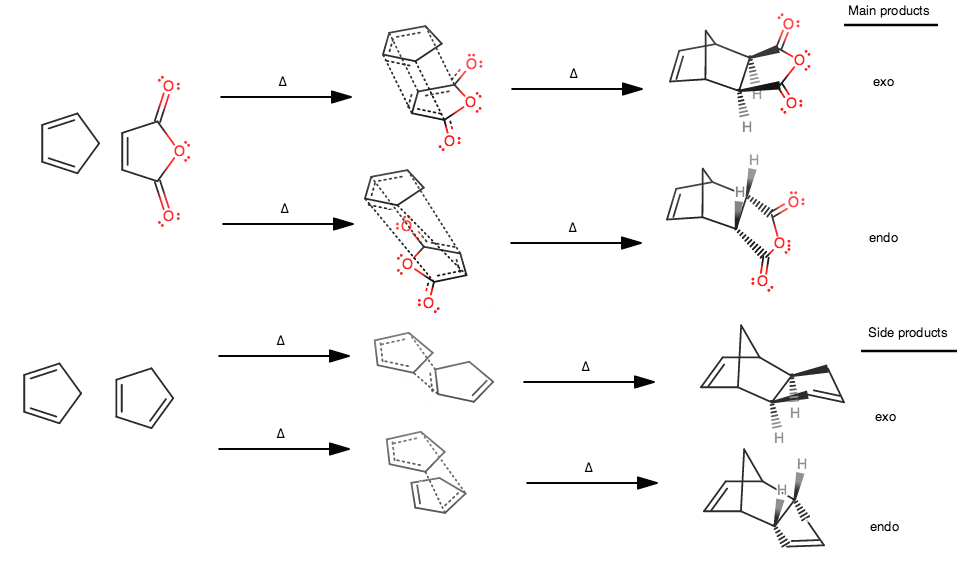 The s-cis configuration is favored in the Diels-Alder reaction because the goal is to get the frontier orbitals (the orbitals that interact at the forefront of the reaction "frontier", or where the main action occurs) to overlap well. Those tend to be the HOMOs and the LUMOs, because they are closest in energy.

Notice how for maleic anhydride, its double bonds are locked into place, like a trans-1,3-butadiene instead of a cis-1,3-butadiene. The orbitals can't overlap nearly as well when in the s-trans configuration if it were to act as the conjugated diene.

Here is how the orbitals look when the reactants are in the transition state: 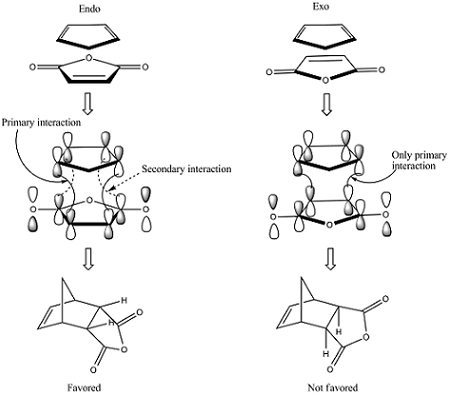 This is special because normally one might expect the exo product to be major.

In fairly mild reaction conditions, the exo product is thermodynamically favorable, but the endo product is more kinetically favorable because of the above "secondary orbital interactions". Basically, the high density in the maleic anhydride promotes this favorable overlap.

I recall calculating the percentages to be almost 90:10 endo:exo on Gaussian computational software when I did the lab.