What is the most stable conformer for 3,3-dimethylhexane, viewed along the #C_3-C_4# bond using Newman projections?

The most stable conformer for 3,3-dimethylhexane viewed along the bond will have two ethyl groups in anti position and gauche interactions between two methyl groups and one ethyl group.

Start by drawing the bond line notation for the compound 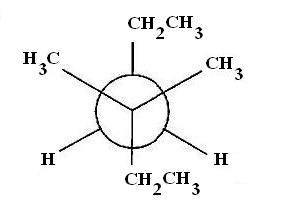 Projection 2 and projection 3 will be less stable than projection 1 because in both cases you have gauche interactions between two bulky ethyl groups and a methyl group.

Therefore, projection 1 describes the most stable conformer for 3,3-dimethylhexane viewed along the bond.

See all questions in Introduction to Newman Projections

8374 views around the world