Explain the mechanism of the Tishchenko reaction?

The overall reaction is an alcohol reacting with sodium metal at a low temperature (to minimize side reactions), forming an tri-oxo compound of sorts, which cascades downwards to form an ester.

Here's how I understood the mechanism. 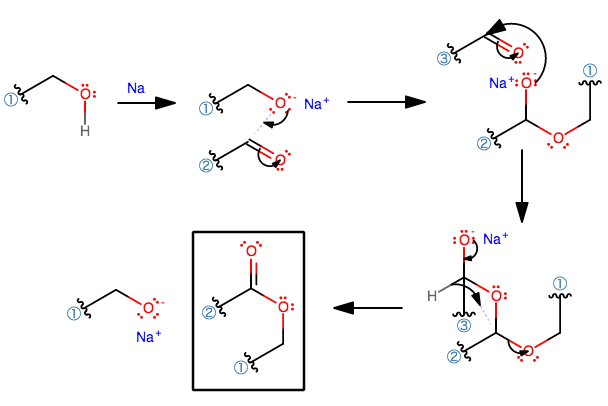 What happens here is known as a 1,3-hydride shift, which is a type of sigmatropic rearrangement. This is actually quite rare! 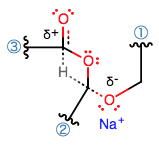 which is quite unusual (normally I would expect to see this kind of agostic hydrogen, across two atoms), but that is what the mechanism suggests.

The middle oxygen cannot accept electrons from the hydride (it is electron-donating, and has no compatible antibonding orbitals).

Instead, the hydride can -donate into the antibonding lobe of the orbital belonging to the carbon next to the (2) alkyl chain.

To maintain a standard octet valence, that carbon must donate electrons into the bottom oxygen's antibonding () orbital, increasing its antibonding character enough to break the bottom bond.

The aldehyde that was bound with the (3) group has now regenerated the original alkoxide reactant.

SIDENOTE: Interestingly enough, one might expect that the middle bond breaks instead, from knowledge about tetrahedral collapse, so why is it that did NOT occur?

Well, if it did occur, then we would go backwards and reform the previous intermediate. So, perhaps there is a large excess of the alkoxide that the equilibrium is pushed towards formation of product.

3673 views around the world