The only intermolecular forces in cyclohexane are London dispersion forces.

You are probably used to seeing the structure of cyclohexane drawn like this.

The electron clouds fill up much of the space, so the molecule resembles a flat disk.

The only bonds in cyclohexane are nonpolar and bonds.

Hence, there are no dipole-dipole or stronger intermolecular forces.

There are only weak London dispersion forces.

These arise because the electron clouds are constantly fluctuating.

At a given instant, there might be a little less electron density in one part of the molecule.

The slight positive charge will attract the electrons in a neighbouring molecule. 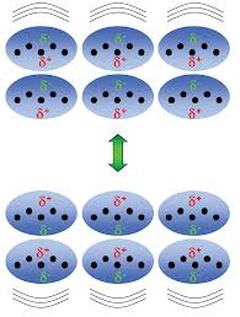 An instant later, the temporary charge imbalance will be in another part of the molecule.

Cyclohexane doesn't even freeze until the temperature has dropped to 6.5 °C.

3880 views around the world