What happens if you mix acetone and chloroform?

This is very unusual, but I will say hydrogen-bonding. Acetone weakly hydrogen-bonds with chloroform. (When I say weakly, I mean weaker than you would see in typical examples like , , or with themselves.)

As a review, hydrogen-bonding is when we have either of the following:

For acetone and chloroform, we have the second option. 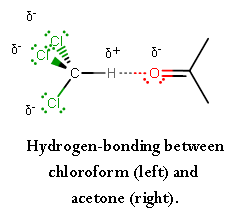 Due to the THREE chlorine atoms on chloroform, the carbon becomes , so it pulls electron density away from the to balance out the electron distribution, thereby making the instead. 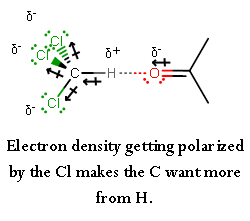 This allows the oxygen on acetone to interact. Yes, this IS hydrogen-bonding; it just isn't as strong as what you are used to seeing in compounds like , , or .

It turns out that this hydrogen-bonding happens to be stronger the original dipole-dipole forces, so this shows NEGATIVE DEVIATION from Raoult's law. 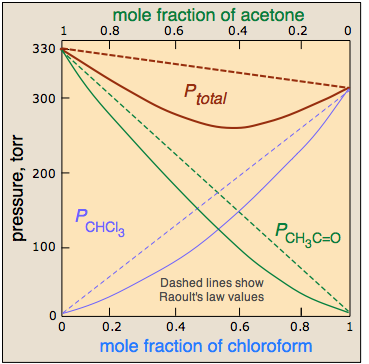 That is, it has a total vapor pressure lower than predicted. This means the volume of the mixture is smaller than the volume we expect if volumes were perfectly additive.